On the night of Apr 13, 1945*, 550 B-29s struck Tokyo in the biggest fire bombing of the war to date.
About 1145pm on that spring Friday night, an incendiary bomblet struck the roof of the Kodokan just to the east of Kano shin’s seat in the Dai Dojo. It was probably an M65, a 6 pound (2.7 kg) napalm bomblet released from a 500 pound (228 kg) cluster bomb, one of scores dropped by a B29 Superfortress heavy bomber from about 2500 ft altitude, and the bomblet probably penetrated partway through the roof.  The previous high altitude bombing campaign against Japan had been considered ineffective, and the bombers were ordered to fly at very low altitudes to deploy the new fire bombs, despite much heavier losses to Japanese antiaircraft fire and interceptor fighter attacks.

Above is a sketch of the M69 Incendiary Bomb – similar to the smaller M65 used more often in the European theater.

Some of the burning jellied gasoline napalm burned through the roof, setting fire to the large, elaborate 神棚 kamidana Shinto ‘god shelf’ that Kano shihan had installed on the front wall of the Dai Dojo. Fire reached the tatami below, burning around 70 mats; soon the fire outside the building burned together with the fire inside to threaten the entire structure.
A fire truck team arrived but low water pressure hampered their efforts. Then, the night watch and local couples cheered on the local ‘tonari gumi’ neighborhood association, which used Kodokan hoses and buckets and assisted the fire truck, putting the Kodokan fire out, but much of the neighborhood was destroyed. Almost 3500 people died and over 170,000 buildings were destroyed that single night. 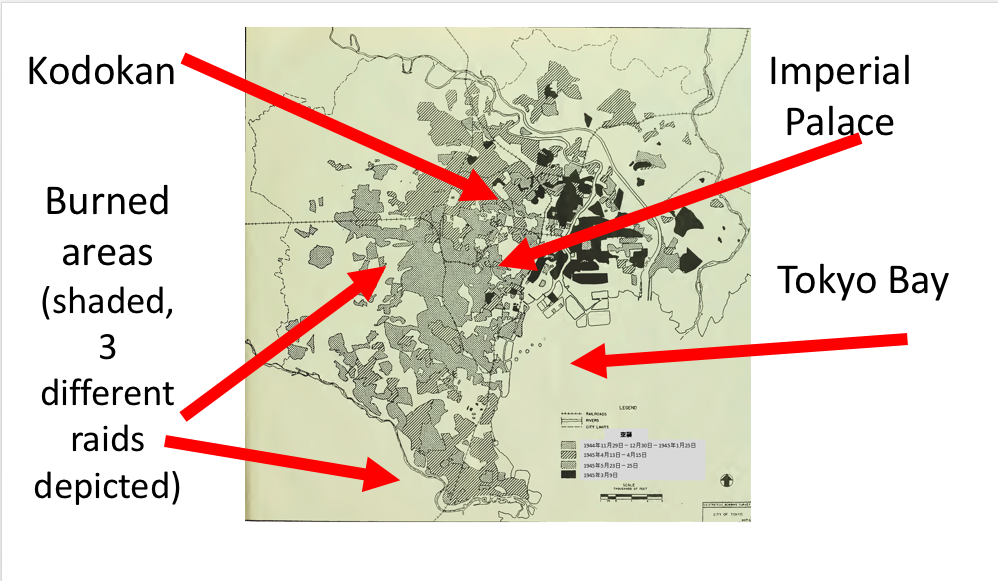 (The map of Tokyo above was adopted from the US Army Air Corps Strategic Bombing Survey, a huge postwar study of the effectiveness of the bombing campaign against Japan. )

Kodokan head Rear Admiral Nango Jiro, Kano shihan’s nephew, was determined not to lose a single day of training. He put local refugees in the Dai Dojo, and had the walls of the rooms near the third floor research dojo knocked down to enlarge it; practice resumed on the 16th. 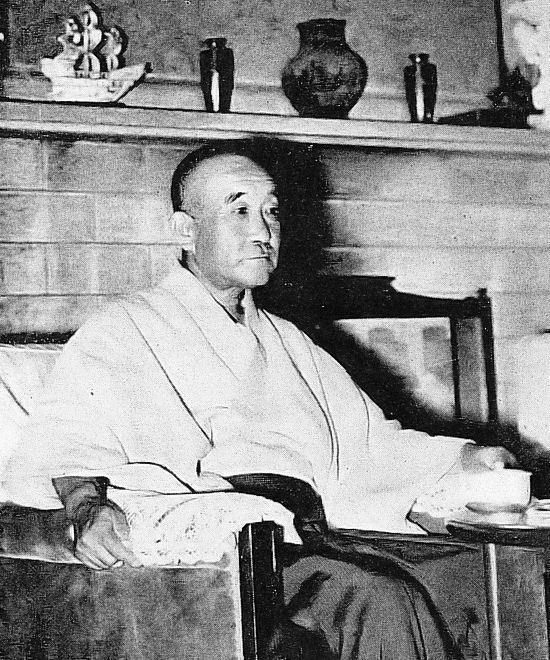 (Photo above from Wiki Commons, probably taken from an interview with               Admiral Nango on the death of his second son in World War II. Story to be related later.)

The Dai Dojo was repaired by the end of 1945 and was used for 寒稽古 kangeiko ‘cold weather training’ traditional training in the new year of 1946.

* Zenjūren 全柔連 (a contraction of the formal name 全日本柔道連盟 Zen Nihon Jūdō Renmei All Japan Judo Federation history cites Mar 13, 1945, which does not match US Army Air records of the raid dates; this history uses US military record dates when available. http://www.judo.or.jp  )